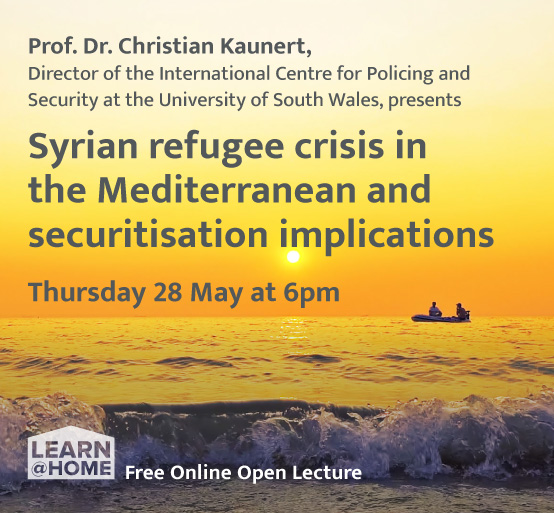 The College will be hosting the final online Open Lecture Of the series, live on Thursday 28 May at 6pm (GMT+1).

Prof. Dr. Christian Kaunert, Director of the International Centre for Policing and Security at the University of South Wales, presents ‘Towards New Refugee Norms in Europe after? The Impact of the Syrian Refugee Crisis in the Mediterranean and the ongoing securitisation process’.

Click here at 6pm to join the online Open Lecture

Many scholars have expressed concern about the securitisation of refugees. Previous findings had suggested that refugees have been increasingly securitised in Europe, i.e. they have been presented as a security threat. With the fresh wave of Daeash terror attacks after Paris, Brussels, Berlin, Barcelona and Manchester, it seems that even decision-makers in the EU are presenting refugees as a security threat. This has had a profound effect on European societies, especially in Eastern Europe, where they are now commonly assumed to be a security threat.

Thus, the lecture will discuss the extent to which the ongoing Syrian refugee crisis in the Mediterranean has led to the development of new asylum norms and policies in Europe. It aims to identify the norms that have underpinned the development of the European Union policy on asylum from its inception until the start of the Syrian refugee crisis. The lecture will also reference the extent, if any, the refugee crisis in the Mediterranean has been used as a window of opportunity by norm and/or policy entrepreneurs to advocate for new asylum norms and practices.

How to join the online Lecture

Gaining access is simple and free- viewers will need a laptop/PC, tablet or smartphone. Click on the link provided by the College (click here to join open lecture broadcast) a few minutes before the lecture begins, to access the streaming platform called ‘Zoom’. After clicking the Zoom link, viewers will be held in a virtual waiting room. From there, the Alm College team will submit viewers into the live lecture.

Please note that the Open Lecture will be recorded.

To sign up to the lecture, visit Eventbrite or email events@almcollege.ac.uk